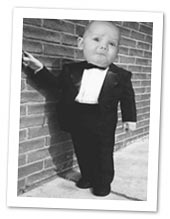 Sure, a lot of girls have babies at Prom. We’ve read about it in all the papers. Dropped into the toilet, left in a trashcan, hidden in a potted plant—Prom pregnancies are yesterday’s news. Six girls had kids at “Magic Beneath the Stars,” my junior Prom, alone.

So Proms and babies go together like Brazilian street children and airplane glue. But I’m a mover, a shaker, a status-quo-breaker. Who was the first to say that her WWJD bracelet stood for “Who Wants Jack Daniels?” Kirsten Miller. Who was the first girl to sleep with the new shop teacher? The K-Dog, that’s right. That’s why I had to take the baby trend to the next logical level.

I decided to have a baby as an escort when I saw what happened to Trina when she had hers last year. Everyone was gawking at the little guy, staring at him in his little baggy. I mean, you’d think the kid was alive or something! And that’s when it hit me. What if he were alive? And what if he were wearing a tiny tuxedo and had a little shot glass taped to his hand? The possibilities and whippets made my mind swim.

And so I gave it up to Ryan Gruelacher. He had three kids already, so I figured that his boys could swim. Just weeks later I wiped my mouth and smiled at my first morning sickness. I was on my way.

I planned it all out so well. I got his little tux from my mom’s ex-boyfriend who had been a magician. His monkey had died, and he owed my mom for a truck payment, so the tiny tux was easy pickings. The shot glass and everything was simple too, but I had to think beyond the outfit. Sure, people would like the baby if he were wearing sunglasses, but I wanted my night to be more than cute. I wanted it to be special.

And so when I had my baby, the name was obvious. I was to be the Prom Queen, and he the Prom King. Prom King Miller. Six pounds nine ounces. That’s right, 69. Prom King was cool already.

Now it’s Prom Night, and I would be lying if I told you that I was anything but nervous. I’ve checked and double checked Prom King’s diaper, milk-proofed my bra, and drunk five cups of Boone’s. The baby ate his first corsage, and something from the monkey suit gave him a rash, but I wouldn’t have this night any other way. He is more than a baby. He is a conversation piece, a beer caddy, and a titwarmer. He is my dinner date, my dance partner, and my designated driver. He is my Prom King.