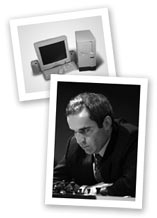 The Company IBM invests millions of dollars into a supercomputer dubbed Deep Blue. The machine utilizes the very latest advances in computer technology and is programmed for one specific purpose: to play chess against reigning chess champion Gary Kasparov and ultimately defeat him. Unfortunately for the company, Kasparov defeats Deep Blue handily, and the resulting loss so irks IBM employees that they vow to defeat Kasparov, no matter what the cost.

After proving themselves in the intellectual arena, IBM now turns its attention to athletics, constructing its fastest, most powerful computer ever designed for one specific purpose: to beat Gary Kasparov in the 100 meter dash. The computer is dubbed Smooth Green, and a confused and horrified public watches in terror as the machine out benchpresses Kasparov.

IBM releases its newest supercomputer, Blue McGavins. McGavins is programmed for one specific purpose: to woo Gary Kasparov's girlfriend, and ultimately marry her. Unfortunately for IBM, McGavins' arrogance and condescending attitude ultimately work against him, and Kasparov easily convinces his girlfriend to move in with him.

IBM fires back with a newer version of Blue McGavins, named Chip Armstrong. Armstrong is suave, sensitive, handsome—everything Kasparov aspires to be, but knows he is not. Chip hosts a successful celebrity roast of Kasparov, ultimately resulting in Kasparov's messy divorce from his wife.

The public is in a near hysteria as both Blue McGavins and Chip Armstrong start their own rival computer companies, and challenge each other to a game of chess. A broken Gary Kasparov is forced to moderate the match.